Set the World on Fire With Love

This heart of mine was made to travel this world!

In 2010 a movement was born.  The people of Haiti had just experienced a devastating earthquake that year. Much like the hurricane that ravished the country over the past few weeks, I could feel the pain in the eyes and in the tears of the men, women, and children who had lost everything. My heart went out to each of them. And though I gave knowing that money was important to the relief efforts, I wanted to give more than just a monetary gift. I wanted to give a gift from the heart. I wanted to let them know that I cared and I could feel their pain. I wanted to lift their spirits. I wanted to reach out and send each of them a letter signed- with love! 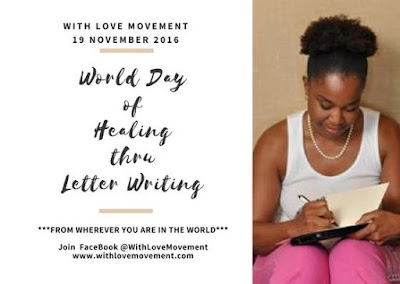 But, by the end of the following year, 2011, the movement of love continued to stir in me. As the holidays approached, I felt a similar yearning. In an email to my family and friends (before social media), I shared with them that while the commercialization of the season was near, I reminded them of a gift that didn't cost a thing. It was a gift that kept on giving- the gift of a written letter.


After watching the Charter for Compassion Trailer, I was inspired by a quote from Joan Chittister:

After sending my email I received lots of feedback and following the holidays I knew I was on to something when a dear friend approached me from Sacred Visioning with a service project intended to encourage me to revisit the idea. I was humbled and grateful for the support. After several meetings, I set an intention, drafted a simple plan, and on November 17, 2012, the Saturday before Thanksgiving, The With Love Movement – an annual worldwide day of healing through letter writing was born.

"There is a movement that wants to be expressed through me. It is my intention to honor this movement in excellence by giving birth to her and watching her grow in the world. Thank you in advance for being the midwives, co creators, and facilitators of this movement. I am enjoying being alive!"

With my intention set, I started a Facebook page, The With Love Movement. One by one I reached out and began inviting my circle of family, friends, and people I admired. Elizabeth Gilbert, (Eat, Pray, Love) was one of those people. When she liked the page, I knew the With Love Movement was traveling. 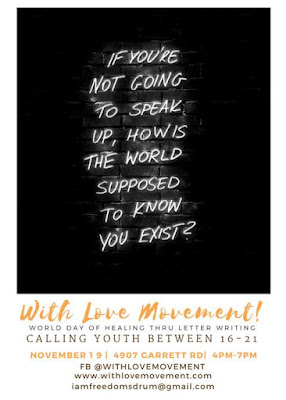 Young people have a voice!
Light our Fire!

Honoring the young voices of social change, this year the With Love Movement will also engage youth (16-21) of Durham, NC and surrounding communities to be the voice of change by writing letters to the world that Light our Fire!
This event is intended to create a safe, loving, and healing experience for youth to be heard and to express their feelings around social justice issues impacting their communities through letter writing.

11-19-2016
4pm
4907 Garrett Road
Durham, NC  27704
Young voices, “If you could leave a legacy by writing a letter to the world, what would it say?”
Read in front of a live audience, letters should be addressed to the world.   Whether written as a rap, poetry, or short essay, they should also address social justice issues including but not limited to, racism, culture of violence, immigration, the environment, the judicial system, education, health, and income disparities.
Be empowered!
The world needs to hear from you!
“Get it up!" "Get it out!” "Get it on paper!”
And, Light our Fire!