Nobody is Free Until We are All Free! 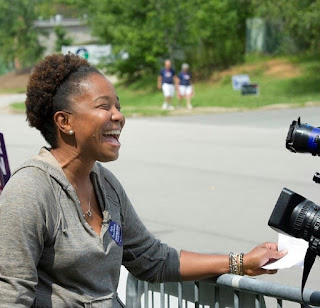 Dear Friends and Family,
Wherever you are I am holding you in the Light of Love. We are in the midst of a long awaited uprising and the largest civil rights movement in this country. Pardon me as I connect the dots of what my next steps may be in all of this. Writing helps me to find my center.


For those who don’t know, I am an organizer. I was the MoveOn council organizer for Durham and Chapel Hill for three years until I stepped down in 2013.

Because of my roots in New Orleans, it was natural for me to organize an oil spill vigil to raise awareness of what was happening in the Gulf of Mexico. From there I helped lead various campaigns including, Jobs Not Cuts and Make Wall Street Pay. I led trainings with area coalitions for the 99%, organized vigils for justice surrounding the murder of Trayvon Martin, and rallied with other organizations around actions for women’s rights. I started a state petition that I delivered with over 12,000 signatures to then Governor McCrory as I stood in solidarity against the conservative takeover in North Carolina. I was a fellow for the Obama campaign and was among those arrested for protesting HB2 (https://www.youtube.com/watch?v=4Lf9c5Mrk8M&feature=emb_title&fbclid=IwAR0YFnOV_-wESnQxnA4d4YtShndKXOAEhR33pqeVVvJpVcX1_Oq0gHy1vEs). 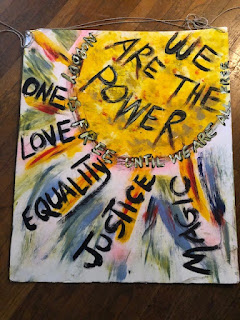 I was voted the first female student government president of the elementary school I attended in Philadelphia. I was the PTA president of my oldest son’s elementary school in New Orleans. I was also the president of my political science class at UNC and even led a movement to stop the proposed recommendation to eliminate the Sociology Department of NCCU of which I am a proud graduate.
I have put some work in! And though this is not an exhaustive list by far, organizing is exhausting work. And, in many cases, as was mine, there are no monetary rewards or compensation. It is work born out of a passion and desire to make a difference.

In my case, as a black woman, it was born out of a desire to have my voice heard, to be the change I wished to see in the world, and to inspire others to participate in civic affairs because regardless of what challenges there were to participate in government, I saw that political change required public participation.

I worked with a beautiful group of people but there were challenges running a predominantly white council. And while all of my organizing from a values perspective were non violent in nature, I witnessed the ugly and violent side of white supremacy.

I recall a rally outside of a Romney/Ryan gathering where white men came up to me and all but spit in my face because I along with others were standing up for women's rights. I was shook! I remember the threatening email I received that Obama and I were going to get what was coming to us. I remember the email from a man who called me a murderer for being pro choice. I remember the video comment that wished I was locked up for the rest of my life among other things. I remember these experiences and others all came from white men.

I learned from the work that historically women in particular had given up our power to these same men who were stuck in time operating out of fear, hatred, and the need to control.
I saw that if these same men were truly pro life, they would have been fighting to end capital punishment; fighting against the privatization of the prison system; fighting against the sale of guns; Trayvon Martin would be still be alive; and, there wouldn't be a need to stand your ground!

I learned that being the target of white supremacist is no laughing matter. Adding to the stress, many organizers are vetted in the system by the police. I was intimidated, exhausted, and scared. Not to mention I had three young children, I was working to finish school, and I was running a small business. When MoveOn reorganized in 2013, I chose to take a hiatus and stepped down as council organizer. I was tired! I am still tired! Black people are tired!

Regardless of your political views, when Obama took office there was a feeling of hope in the black community. But soon after Trump was elected, the balloon of hope deflated. Almost immediately there was an intentional energetic move to undo and undermine all of the work we had done to honor and affirm our inherent dignity and right to rise in our power. It seemed that in order to make America great, it had to first prove to my black and brown brothers and sisters that not only did our voices not matter, our lives didn’t either.

Racism was [and is] alive and well. And police brutality was not getting worse, it was being videotaped over and over and over again- without convictions! I was tired of biting my tongue, holding my thoughts inside, holding unexpressed feelings and emotions, and looking at my children with sorrow as we watched the repeated episodes of being black in America play out.

By the time of the first Women’s March in 2017, it hit me that I was marching alongside some of the same women who voted Trump in office. The dis-ease in my body let me know that it was white America that needed to stand up to the problem of racism.

I released myself to learn self care, to have some fun in the sun, and deepen my spiritual connection. I poured myself into serving a beloved community of Unitarian Universalists and white allies who had an earnest desire to make a difference and doing the work of dismantling racism. (Eno River Unitarian Universalist Fellowship (ERUUF)

In the middle of a pandemic where African Americans are losing their lives disproportionately to COVID-19, I feel sad and infuriated that the narrative of racial injustice continues in this country. I feel the rage of the burning fires and the voices that have gone unheard. If white America won’t stand up to the giant it created then there will be hell to pay from the blood of our ancestors that are crying out:
No Justice No Peace!
#ENOUGH
Until we are all free none of us are free!
Forward together- not one step back!
We are ONE!
Power to the People!

May they be protected. May they be guided by The Light. May our voices be heard. May justice prevail and may the systems that no longer serve us be dismantled and burned to the ground. May we give birth to a new world and breathe in new life and new energy. May we be guided to new possibilities that fuel our passion and desire to make a difference.
May we do it with #love-
With LOVE,
Me
#blacklivesmatter
#arrestandcharge
#plot #plan #strategize #organize #mobilize
#VOTE
Labels: #blacklivesmatter #iamfreedomsdrum freedom justice love Shawn Trimble
iamfreedomsdrum
When your mind unwinds, your spirit it will find. Welcome to an inspirational healing center that creates and promotes spiritually enriching activities, workshops, movements, publications, and products. Founded in 2001 Freedom’s Drum Marketing & Consulting is a personal growth and development organization. Freedom's Drum Marketing and Consulting has been a source of Light energy. It is a humanitarian force that creates global movements (@WithLoveMovement, @LegacyofPrayers), workshops, publications, products, and social justice initiatives.