It's Okay to Say No! 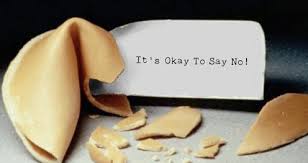 21 days ago I embarked on a new leg of my journey to freedom by eliminating sugar from my diet. I lived for the dessert(s) I was going to have on any given day sometimes forgoing the nutrition of a healthy meal not only to avoid the extra calories but more often to feed my sweet tooth.

There is no getting around the fact that sugar has made its way to almost everything that we eat. In my opinion, the food industry has gotten away with murder and it makes me sad to think about all of the ailments and disease that this culprit- sugar has caused. For an addict, it is the drug that is everywhere. It can feel hopeless!

Besides the obvious places like, sodas, candy, juice, and my favorite bakery items, I also know that through the way our body breaks down sugar, it's found in starches like potatoes, rice, pasta, bread and other places like honey, and even natural fruit!.

I knew this going in, but I decided to concentrate my initial focus on refined sugar. I am in a process that I respect and while one method works for another, the gradual baby steps feel more loving to me. My past relationship with sugar concentrated on weight loss. My new relationship is concentrated on self love. Long term I want to be in a healthy relationship with both sugar and myself that isn’t based on a reward system, but on a mindful system that desires to be healthy and respects the temple that I am in.

The first week was a fruit fast. I consumed so much fruit that by the 4th day my mind finally caught up with the fact that no amount of fruit was going to give me the same feeling as my vegan chocolate cake from Whole Foods. It was pointless to continue in that way. Subsequently I pouted like a child in a corner but I didn't give in to my cravings.

What I noticed however is that I had more energy by the end of the week. Before I started, I didn't have a hearty appetite for food, because I was always craving sugar. But on Saturday, six days in, I was planning a Sunday meal- something I hardly ever do! The beautiful thing was that I wasn't cooking for me as much as I had the energy and the desire to cook for my children/family/friends. They were so happy! I had a craving for okra, tomatoes, corn, and shrimp, and I wound up cooking favorite dishes from back home in New Orleans that I usually only make for Thanksgiving. I even made fresh strawberry shortcake- and I gave it away!

By the second week, I became more conscious of the carbs that I was consuming. Being a vegetarian can be a tricky for me and because of my naturally slow metabolism, I am aware that I can gain weight fast if I am not paying attention. Nevertheless, I allowed myself to enjoy my carb heavy left overs and reminded myself to be gentle with myself during this process. I looked forward to week number three and what it would bring.

This past week, week three, was probably one of my most balanced weeks. (Except for the bag of cherries that I clobbered). Because of my schedule, Sunday dinner became Monday dinner but I cooked a wonderful meal for the family and it felt good! I drank more water, paid more attention to the carbs, and ate more vegetables. I also did more walking this past week.

Though I was hoping against them, I still had cravings that told me that I was not out of the woods yet. I craved for cookies, a slice of good cheesecake, chocolate covered almonds, and a scoop of chocolate vegan ice cream. I didn't dismiss them but rather I saw that Oreo cookie going inside the milk. I could almost taste it in my mouth. But I didn't give in.  I've learned that it's ok to say "no".

One day I really wanted a cookie and I called a girlfriend who lovingly talked me out of it, (thanks Shelbia), and I found a substitute in a banana and almond butter flat bread sandwich. On another day I pulled out my Nutri Bullet and made a fresh strawberry, banana, kale, and coconut milk smoothie. It was good!

At the end of 21 days I have noticed an increased amount of creative energy. There may be some correlation between social activism and good nutrition. I've noticed this during the times when I given up meat. Since giving up sugar, I've noticed the same.

I noticed that I reached out to a politically active circle; I find myself meditating more; my thoughts seem clearer; my premature hot flashes have subsided; I don't do scales, but I don't seem as top heavy and I my tops seem smoother; my legs don't seem as dimply; and I even activated a prayer page on Facebook that I started last year, Legacy of Prayers.

Today on this 22nd day, I made homemade oatmeal, coconut, raisin, carob chip cookies lightly sweetened with maple syrup. I haven’t had sugar in my house for almost a year, but I had maple syrup hiding in my refrigerator. It worked! The cookies weren't very sweet, but they were good enough to take the edge off of what I think I needed.

Now, I look forward to week number four and a lifetime/lifestyle of increased health, vigor, vitality, and abundance of creative energy. I will keep you posted!

Thank you for being on the other side.
With Love,
Shawn

Join the group, My Life Without Sugar
Labels: #iamfreedomsdrum 21 days addiction energy freedom habit healthy legacy of prayers love my life without sugar spirituality sugar vitality
iamfreedomsdrum
When your mind unwinds, your spirit it will find. Welcome to an inspirational healing center that creates and promotes spiritually enriching activities, workshops, movements, publications, and products. Founded in 2001 Freedom’s Drum Marketing & Consulting is a personal growth and development organization. Freedom's Drum Marketing and Consulting has been a source of Light energy. It is a humanitarian force that creates global movements (@WithLoveMovement, @LegacyofPrayers), workshops, publications, products, and social justice initiatives.