“Writing is one of the most effective ways to access an inner world of feelings that is the key to recovering from genuine trauma and everyday stress alike.”


TODAY is the DAY! 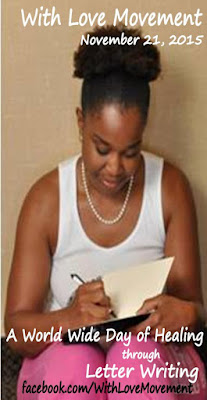 The With Love Movement- World day of Healing thru Letter Writing is for people around the world to connect and gather individually or collectively on a day of action to write letters to as many people as they are led to while spreading the gift of love.

Not sure who to write to? Be inspired!
Here are a dozen ideas to get your writing palette going.

1. To Get A Letter, Send A Letter; Write To A Pen Pal!
“I've had some old pen pals for years -- folks I met via Livejournal or friends who just really like getting and sending mail. But new pen pals are super exciting and wonderful, too.
They can also be hard to come by -- not least of all because a lot of people have good intentions and then are unable to follow through with letters (see: my two month gap in sending mail because of the holidays). But there are some totally awesome ways to find strangers who want to share this hobby with you, if you are interested in writing some words up and tucking them into the mail.”
...read more here: http://www.xojane.com/diy/find-a-pen-pal

2. Write to a Stranger!
“When 24-year-old Hannah Brencher moved to New York after college, she was hit by depression and overwhelming loneliness. One day she felt so alone, she wanted to reach out to someone. And so she put pen to paper and started writing letters. Letters to complete strangers.”
...read more here: http://www.theguardian.com/lifeandstyle/2013/jan/22/writing-letters-strangers-make-world-better

3. Write to the Elderly!
“So many elderly people have no one to care for them, no one to look after them, no one to love them. We are here to change that. Founded in December of 2013 by Jacob Cramer, Love For The Elderly is an organization that is dedicated to providing happiness to the elderly. Cramer had always been passionate about giving back and helping others. He eagerly wanted to make a difference, and began thinking of what he could do to touch the lives of the elderly, a group which he felt could greatly benefit from additional tender, loving kindness. Then, he thought of writing anonymous letters of kindness.”
...read more here: http://www.lovefortheelderly.org/about.html

4. Write to a Soldier!
“The Letter Writing Team (LWT) is a team of amazing Angels who enjoy writing to our heroes, and who know how important it is for the service members to hear their name called at mail call. Sadly some service members get no mail at all from back home. LWT Angels write to service members who are waiting for adoption through our Deployed Adoption Team and to those who might need additional support. Angels on this team are required to write as few as one letter a month but some write as many as 14 letters per week!”
...read more here: http://soldiersangels.org/letter-writing-team.html

5. Write to an Elected Official!
“By now you are probably looking for ways to get your issue noticed by people who have the power to help you. To get the best results, you will probably want to try several of the direct action methods discussed in this chapter. In this section, we will show you the best way to write a letter to your elected officials.
A well-written personal letter may be the most effective way to communicate with elected officials. They want to know how their constituents feel about issues, especially when those issues involve decisions made by them.”
...read more here: http://ctb.ku.edu/en/table-of-contents/advocacy/direct-action/letters-to-elected-officials/main

6. Write a letter to yourself!
“Most of us have poured out our hearts in angry, accusatory, plaintive, or sad letters after people have betrayed or abandoned us. Doing so almost always makes us feel better, even if we never send them. When you write to yourself, you don’t have to worry about other people’s judgment — you just listen to your own thoughts and let their flow take over. Later, when you reread what you wrote, you often discover surprising truths.
Writing is one of the most effective ways to access an inner world of feelings that is the key to recovering from genuine trauma and everyday stress alike.”

7. Be inspired...Write a letter to the world!
“Hi, my name is Toby, and I am now seven years old. When I was five, I decided that I wanted to find out lots about the world, so I started writing letters to somebody in every country in the world. I started the project because I wanted to find out more about the world, help people understand each other better, and make the world a better place - and I still do! It's really tricky to find people in every country, but lots of people have been helping me - thank you!”
...read more here: http://www.writingtotheworld.com/

8. Be inspired...Write a Love Letter!
“Whether you want to profess your love to someone special, or you want to re-affirm your love to your significant other, words are a massively powerful tool.
The problem is that most people aren’t as eloquent as they would like to be when it comes to putting pen to paper (or fingers to keyboard).
If you effectively write a love letter to your significant other, you can make them cry tears of joy, you will deepen your connection with them, and they will have a keepsake to cherish for eternity that they can come back to whenever they feel like reading it and feeling a bonus burst of love.”

9. Write a letter to you parent!
“In this junk-laden world, nothing shows appreciation like sitting down and taking the time to write out a lengthy letter—on paper, not e-mail.”
...read more here: http://www.familylife.com/articles/topics/life-issues/relationships/honoring-your-parents/4-practical-ways-to-honor-your-parents

10. Write a letter to a child!
Young Somali refugees living in the world's largest refugee camp, in Kenya, have sent letters of encouragement to Syrian refugee children who have also had to flee their homeland.
...read more here: http://amisom-au.org/2014/04/uplifting-letters-of-hope-from-young-somali-refugees-to-syrian-refugee-children/

11. Write a letter to Refugee!
In October last year a Syrian refugee handed this letter to a United Nations refugee agency (UNHCR) worker at the Za’atari Camp in Jordan.


“I am a miserable Syrian refugee in Zaatari camp now.
I am working as a dustman at [name redacted], Zaatari camp to support my parents and my sister.
Before coming to Jordan I suffered greatly from the dreadful and catastrophic events that took place in my country, Syria, and are still taking place, air raid, shelling, bombing, tanks, sniper and killing everywhere.
Our house was destroyed and thousands of people were killed. These terrible and this affected us negatively.
My sister and I quit our university study and lost our dreams and ambitions thereby we were both outstanding students studying English literature at Damascus university, Syria.
We have been living in Zaatari camp for two years. This long period of false promises to continue our study and to make up for the lost time made us really hopeless and despaired.”

12. 8 Reasons to Write More Letters!
Handwritten letters are priceless gifts. There are countless reasons to write more letters, and here are 8 more of them.
...read more here: http://www.iamfreedomsdrum.com/2015/10/7-reasons-to-write-more-letters.html

For more information on The With Love Movement and how you can participate: World Letter Writing Party